During World War Two the local area around Kyle and Kyleakin was extremely 'hush-hush' as to military and naval activity, so much so that even today some residents are unaware of some of the industrial archaeology to be found on and around the local hills.

Kyle was a centre for stocking up minelayer ships with various types of mines, a situation that only really came to the general attention of the public following the Port Napier incident.

Prior to that the area was heavily fortified with Anti-Aircraft Batteries on the Plock at Kyle and on Cnoc na Loch at Kyleakin, with Barrage Balloons around the Naval Base at Kyle.

Whilst there is alot of information regarding the Port Napier incident, these pages are designed to look at some of the less well known areas.

The pictures below show the AA Battery as it is today (2015) on the hill known as Cnoc na Loch that overlooks Loch na Beiste and the waters to the east of the Kyle of Lochalsh.

Interestingly all the bricks depict the word 'METHIL' from the famous brickworks in Fife. 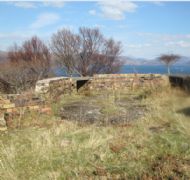 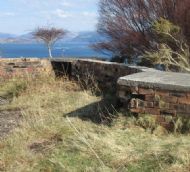 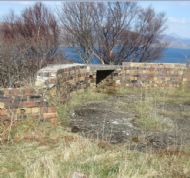 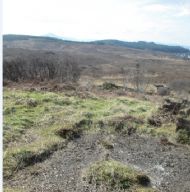 AA Battery at Cnoc na Loch
Looking west towards some of the other ruins - mast base, hut bases etc